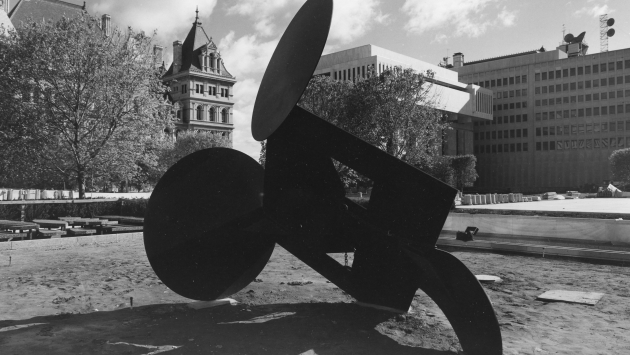 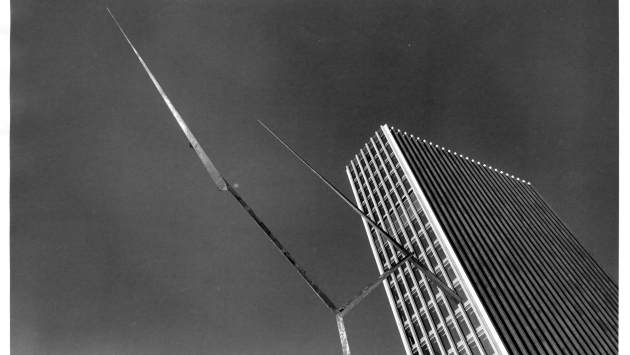 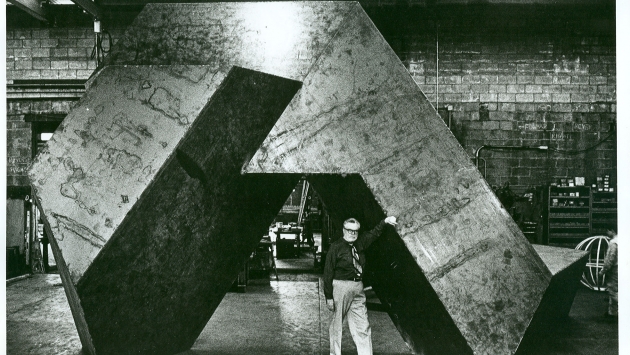 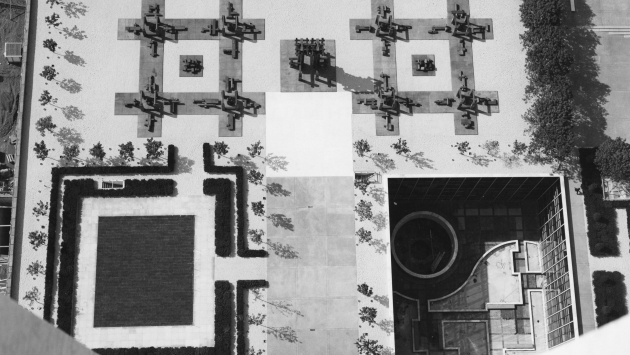 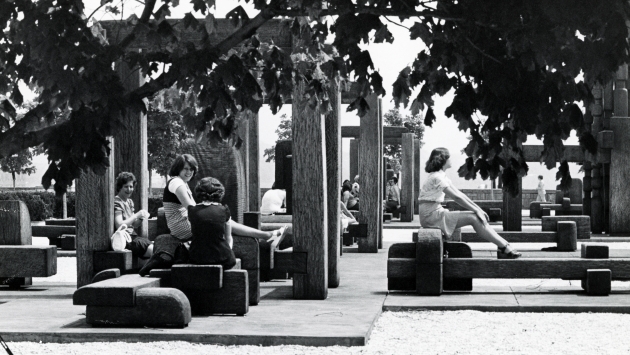 Ellsworth Kelly standing next to his sculpture, Yellow Blue, 1968.

George Rickey in his studio.

Why are the works of art all modern?
Just as any style has waves of popularity, the artwork of the Empire State Plaza Art Collection was created between the years of 1952 and 1973 when abstraction was a popular style of art. It was also Governor Nelson A. Rockefeller’s preferred artistic style.

Why are so many artworks of the collection Untitled?
The majority of artists in the collection wanted viewers to freely interpret their abstract art without titles influencing their understanding of the work.

Did Claes Oldenburg intend for his sculpture to resemble Mickey Mouse?
Yes and no! While Geometric Mouse, Scale A, ⅙ does resemble the popular Disney character, it also was inspired by early movie cameras. Oldenburg adopted the image of a mouse as an autobiographical logo throughout his career.

Which outdoor sculptor also designed playgrounds?
In the same year, he made Wild Rice, Lyman Kipp participated in the 1967 National Playground Competition in Washington, D.C.

How long are the steel lines of George Rickey’s kinetic sculpture, Two Lines Oblique?
Each stainless-steel line making up the Y shape of Two Lines Oblique is 32 feet long and can swing in long circles extending 8 feet from the ground to 54 feet in the air.

Did any of the sculptors get to choose where their works are placed outside on the Plaza?
Yes, several of our outdoor sculptures are site-specific. George Sugarman cited the location of Trio along a busy pedestrian walkway on the Plaza purposely so viewers can visually explore the many curves and angles of his work.

How are the outdoor sculptures able to withstand the elements?
Aside from regular checking and maintenance by New York’s Office of General Services, many of the outdoor pieces are made with a special type of copper chromium alloy steel called “weathering steel.” It is durable but easy to sculpt. If painted it is able to last for years in harsh weather, and if not painted it will achieve a uniform patina throughout its surface.

Where were these large sculptures made? How did they get here?
Many of the steel sculptures were constructed for artists by the Lippincott Company, owners of a fine arts metal fabricating company in North Haven, Connecticut. Finished sculptures were moved to Albany on flatbed trucks.

How important is the placement of the sculptures on Plaza grounds?
Different artists placed their works at various places on the Plaza for aesthetic and symbolic reasons. Calder’s Triangles and Arches, for example, can be viewed at some angles as a miniature representation of the nearby Church of the Immaculate Conception. The diagonal boxes of Antoni Milkowski’s Salem 7 are placed to create a juxtaposition between the curved Egg theatre and the straight verticality of the Corning Tower.