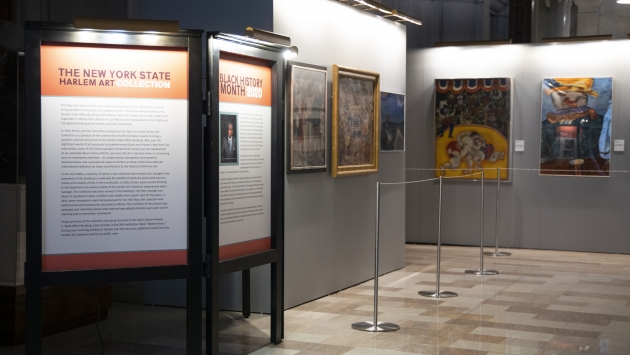 The New York State Harlem Art Collection draws attention to significant works of art by predominantly Black and Hispanic artists.  The pieces were selected by the Harlem State Office Building Committee on Arts and Culture, which was created and organized in 1975 by then Senator H. Carl McCall with representation from State and City governments and the Harlem business community.

In 1976, McCall and the committee established the New York State Harlem Art Collection as a product of the community to fulfill the State’s desire to bring a positive cultural component to the Harlem State Office Building. With over 100 significant works of art produced by predominantly Black and Hispanic New York City area artists, some of the finest examples of twentieth-century art are represented. As we celebrate Black History Month, we honor McCall’s role and vision in comprising such an impressive collection.  Its unique artistic perspective and powerful expressiveness now resonates far beyond Harlem as these artists have attained international attention as major contributors to the history of American art.

In the mid-1990s, a majority of works in the collection were moved into storage in the basement of the building to make way for exhibits of works by local contemporary artists and student artists in the community. In 2006, broken pipes caused flooding in the basement and several pieces of the Harlem Art Collection experienced water damage. The collection was then moved to the building’s 13th floor storage area where it remained in poor condition and hidden from public view for five years. In 2012, when renovations were being planned for the 13th floor, the collection was rediscovered and temporarily relocated to Albany. The condition of the artwork was assessed and individual pieces that required specialized attention were sent out for cleaning and conservation treatments.

Today, portions of the collection are being returned to the Adam Clayton Powell, Jr. State Office Building, most recently in the 2019 exhibition titled, “Harlem Roots.”  During new revolving exhibits in Harlem over the next year, additional works from the Harlem Art Collection will be on public view.

H. Carl McCall has had an extraordinary career in both the public and private sector. With an unparalleled career as a public servant, McCall is the first African-American to be elected New York State Comptroller. He represented Upper Manhattan in the State Senate and served as Ambassador to the United Nations, President of the New York City Board of Education, and, most recently, as Chairman of the SUNY Board of Trustees before retiring in June 2019.

He received his education at Dartmouth College, the University of Edinburgh in Scotland, and was awarded a Doctorate in Divinity from Andover Newton Theological Seminary. In addition, he has been awarded nine honorary degrees.

During his prodigious career, McCall was a schoolteacher, a three-term New York State Senator (1975-1980) and was appointed Ambassador to the United Nations under Jimmy Carter. In 1983, McCall was appointed to serve as Commissioner of the New York State Division of Human Rights, and, in 1994, he was the first African-American to hold statewide office when he was elected New York State Comptroller. In 2002 he became New York’s first African-American major-party gubernatorial candidate.

Since 2002, Carl McCall has served on a number of corporate boards. He has also served on the State University of New York’s Board of Trustees beginning in 2007. In 2011, he was appointed Chairman of the Board where he served until his retirement in June 2019.

Maps of the Empire State Plaza Concourse and Plaza Levels